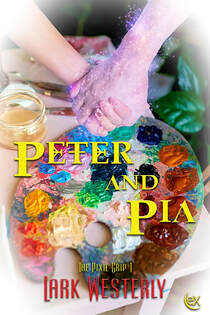 The Pixie Grip series is a companion to the Fairy in the Bed and The Red Cat series. It spans over seventy years, and tells the story of the Peckerdale/Grene families, their friends and relatives and, especially, the events leading up to and resulting from the building of the Peckerdale-Grene Community Tower in the 1980s.

Each book focuses on one or more members of the extended families. The first,  Peter and Pia, tells the story of how Peter Peckerdale, fresh from a traumatic time spent  over there in the human realm, met and married Pia. Some of the events in this story are touched on briefly in books in The Fairy in the Bed series, set decades afterwards. Peter and Pia begins in the 1940s and ends in 1956.

Book Two, Peter G and Gentian, follows Peter's godson and cousin through his early adult years and his romance with the mysterious Gentian. This one begins in 1961 and ends in 1963..

Book Three, Joe and Liz, runs through the early 1960s, following Joe Bakewell, a distant cousin of the two Peters, and his beloved, Liz. Joe's mother, Betula, is a pixie halfling and his father, Justin, is human. Simon, Joe's mostly-human son is a major character in later-set books.
​